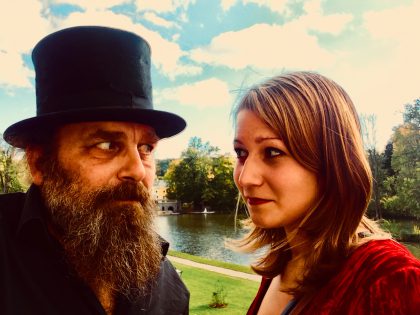 As a pianist Hannah Eisendle is especially interested in the performance of contemporary compositions. She performs as a soloist, chamber musician, and Lied accompanist. International appearances include i.a. the Palacio de Bellas Artes in Mexico City, the Carnegy Hall and the Austrian Cultural Forum in New York. She likes to work with artists from different genres, combining styles through improvisation. As a conductor she works as musical assistant for the youth opera productions at the opera house Theater an der Wien.

In her works as a composer Hannah Eisendle takes a great interest in the interaction of visual and acoustic aspects and in cooperations with scientists and artists (theater, dance, literature, fine arts, film). Her works (instrumental and vocal pieces, multimedia compositions, pieces for Big Band, pop songs, and experimental films) have been performed in Vienna, Linz, Salzburg, Bratislava, Taipei, Paris, Mexico City and New York.

Herbert Könighofer has performed as sax-player at Alabamas Soul Band, Joruma and the Funky Horns, Jesus Christ Smokes Holy Gasoline, or Blaumarot, and has – together with fellow musicians – established several band projects, such as the black hakawati, Herby King Jazz Quartet, ZAVS,  k3, or the merry poppins. Könighofer has furthermore contributed film-scores for documentaries and art-films. Ever since 2012, Herbert Könighofer has been working on the project Brian Brain – club audioprovocateur and invited several international and local musicians, such as Sid Hille, Peter Kronreif, or Sucheta Ganguly to the club.

In the duo-project of Eisendle and Könighofer, instrumentation as well as styles offer a vast spectrum. With their program, the two musicians transcend boundaries between New Music – with pieces by Erik Satie or György Ligeti -, their own compositions, Jazz and improvised music. By extracting sounds from their traditional contexts, shaping, re-combining and interpreting them, they present a lively interaction that catches the sounds of the very moment. In 2018, the duo commenced to collaborate with renown Taiwanese counter-tenor and lutist Cheng-Ying Chuang and have added yet another aspect to their project. Please follow the >link to find out more about this experiment spanning from rock to baroque, from Asian to European classic onward to electronics.

The duo is available for your incentive, exhibition opening, wedding, concert-evening and more.