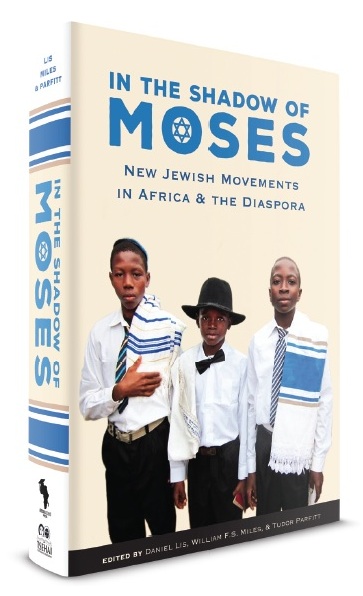 Tudor Parfitt‘s book “Journey to the Vanished City” has been a major source of inspiration for my research on the African Hebrew Israelites of Jerusalem‘s diaspora and return, and has strongly coined The New Ship of Zion. I think I even carried it with me when visiting the Bold Spiritual Initiative in Ghana in 2001… Guess how excited & honoured I was when I was invited to contribute to “In the Shadow of Moses“, edited by Daniel Lis, Bill Miles and Tudor Parfitt himself! I have come up with a chapter titled “Who opened the Seven Seals?”, relating the realities of the Rastafari Movement to those of African Hebrew Israelites in the Kingdom Of Yah. The book has dropped with TSEHAI Publishers – check it out!

In the Shadow of Moses: New Jewish Movements in Africa and the Diaspora presents original research by an international group (African, American, European, Israeli) of eleven scholars who have been conducting fieldwork on emerging Jewish communities in Africa as well as on the interaction of Jews and Africans (and their descendants) in Israel, Ethiopia, and, during the Holocaust, Senegal. It also contains contributions from the disciplines of history and philology that contextualize these emerging movements in light of previous European imaginations and expectations about the Ten Lost Tribes of ancient Israel. The volume will appeal to both scholars and general readers in both Africanist and Jewish studies.

Who opened the Seven Seals?
Many of the concepts of the African Hebrew Israelites – a spiritual community who have traced back their roots to the Biblical Israelites and have actually repatriated to Israel – appear to be very similar to Rastafarian beliefs. Martina Könighofer’s article „Who opened the Seven Seals?“ focuses on conceptual correlations but also differences in leadership, community-structures, recreated historiographies, spiritual concepts, and lifestyles of both movements.

While – mainly thanks to Reggae music – Rastafari has become a global phenomenon with followers in the biblically prophesied “four corners of the earth”, the African Hebrew Israelites appear to be a relatively closed unit with a core of set rules and centralized structure, based in the “Kingdom of Yah” in Dimona/Israel.

Starting off with the quest for the “Conquering Lion of Judah”, who is believed to be personified by Haile Selassie I by Rastafarians, versus Ben Ammi Ben Israel by the African Hebrew Israelites, I intend to shed some light on the historical paths of both communities, their common “spiritual warfare against Babylon”, their individual concepts of the Holy Land (Ethiopia and Israel) and their roots, and compare Rastafarian Livity to the Righteous Lifestyle of the African Hebrew Israelites, including the impact of music, language, and gender-structures.